This article is about the Bono visual symbols. For the term in physics, see Adinkra symbols (physics). 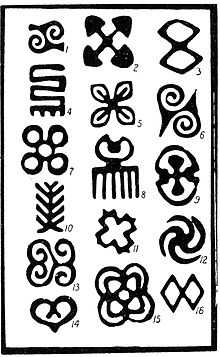 Adinkra are symbols that represent concepts or aphorisms. Adinkra are used extensively in fabrics, logos and pottery . They are incorporated into walls and other architectural features. Fabric adinkra ary woodcut sign writing as well as screen printing.[citation needed]Adinkra symbols appear on some traditional Akan goldweights. The symbols are also carved on stools for domestic and ritual use. Tourism has led to new departures in the use of the symbols in such items as T-shirts and jewellery.

The symbols have a decorative function but also represent objects that encapsulate evocative messages that convey traditional wisdom, aspects of life or the environment. There are many different symbols with distinct meanings, often linked with proverbs. In the words of Kwame Anthony Appiah, they were one of the means for “supporting the transmission of a complex and nuanced body of practice and belief”.[1] 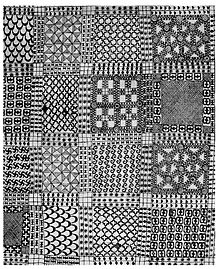 Adinkra symbols were originally created by the Bono people of Gyaman. Gyaman King Nana Kwadwo Agyemang Adinkra originally created or designed these symbols and named it after himself ‘Adinkra’. The Adinkra symbols were largely used on pottery, stools etc by the people of Bono. Adinkra cloth was worn by the King of Gyaaman, and its usage spread from Bono Gyaman to Asante following its defeat. It is said that the guild designers who designed this cloth for the kings were forced to teach the Asantes the craft. Gyaman king Nana Kwadwo Agyemang Adinkra’s first son, Apau, who was said to be well versed in the Adinkra craft, was forced to teach more about Adinkra cloths. Oral accounts have attested to the fact that Adinkra Apau taught the process to a man named Kwaku Dwaku in a town near Kumasi.[2][3][4][5][6][7]

The patterns were printed using carved calabash stamps and a vegetable-based dye. The cloth features fifteen stamped symbols, including nsroma (stars), dono ntoasuo (double Dono drums), and diamonds. It is now in the British Museum. 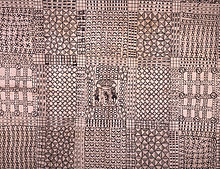 The next oldest piece of adinkra textile was sent in 1825 from the Elmina Castle to the royal cabinet of curiosities in The Hague, in response to an assignment from Major F. Last, who was appointed temporary Commander of Dutch Gold Coast. He probably had the cloth commissioned for William I of the Netherlands, which would explain why the Coat of arms of the Netherlands is in the centre. The other motifs are typical of the older adinkras. It is now on display in the National Museum of Ethnology in Leiden.[8]

Adinkra cloths were traditionally only worn by royalty and spiritual leaders for funerals and other very special occasions. In the past they were hand printed on undyed, red, dark brown or black hand-woven cotton fabric depending on the occasion and the wearer’s role; nowadays they are frequently mass-produced on brighter coloured fabrics[9] 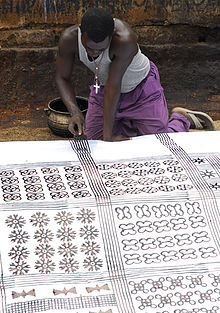 Anthony Boakye uses a comb to mark parallel lines on an adinkra cloth in Ntonso, Ghana.

Anthony Boakye prints an adinkra cloth with a calabash stamp in Ntonso, Ghana.

The present centre of traditional production of adinkra cloth is from Ghana, Ntɔnso, 20 km northwest of Kumasi and in Ivory Coast.[10]Dark Adinkra aduro pigment for the stamping is made there, by soaking, pulverizing, and boiling the inner bark and roots of the badie tree (Bridelia ferruginea)[11] in water over a wood fire. Once the dark colour is released, the mixture is strained, and then boiled for several more hours until it thickens. The stamps are carved out of the bottom of a calabash piece. They measure between five and eight centimetres square. They have a handle on the back, and the stamp itself is slightly curved, so that the dye can be put on with a rocking motion.

Recorded sample of fifty three adinkra symbols and their meanings