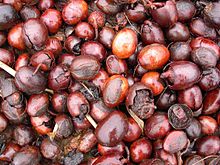 Seeds of a shea tree — raw materials for oil production

Shea butter (/ʃiː/, /ˈʃiːə/, or /ʃeɪ/) is a fat extracted from the nut of the African shea tree (Vitellaria paradoxa).[1] It is ivory in color when raw, with more processed versions being white in color, although it is commonly dyed yellow with borututu root or palm oil. It is widely used in cosmetics as a moisturizer, salve or lotion. Shea butter is edible and is used in food preparation in some African countries.[2] Occasionally, shea butter is mixed with other oils as a substitute for cocoa butter, although the taste is noticeably different.[3][4]

The English word “shea” comes from s’í, the tree’s name in Bambara.[5] It is known by many local names, e.g., Kpakahili in Dagbani, taama in Waala, nkuto in Twi, kaɗe or kaɗanya in Hausa, Òkwùmá in Igbo language, òrí in Yoruba language, karité in the Wolof language of Senegal,[6] ori in some parts of West Africa, and many others.[7][8]

The common name is shíyiri or shísu (lit. “shea tree”) in the Bambara language of Mali. This is the origin of the English word, the primary pronunciation of which is /ʃiː/ (rhyming with “tea”), although the pronunciation /ʃeɪ/ (rhyming with “day”) is common and is listed second in major dictionaries. The tree is called ghariti in the Wolof language of Senegal, which is the origin of the French name of the tree and the butter, karité.

The shea tree grows naturally in the wild in the dry savannah belt of West Africa from Senegal in the west to Sudan in the east, and onto the foothills of the Ethiopian highlands. It occurs in 21 countries across the African continent, namely Benin, Burkina Faso, Cameroon, Central African Republic, Chad, Ethiopia, Eritrea, Ghana, Guinea Bissau, Ivory Coast, Mali, Niger, Nigeria, Senegal, Sierra Leone, South Sudan, Sudan, Togo, Uganda, Democratic Republic of the Congo, Kenya and Guinea.

A testa found at the site of the medieval village of Saouga is evidence of shea butter production by the 14th century.[9] 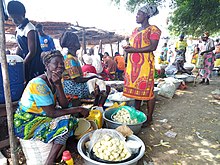 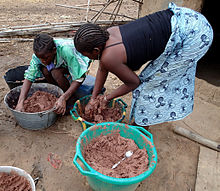 Shea butter melts at body temperature. Proponents of its use for skin care maintain that it absorbs rapidly into the skin, acts as a “refatting” agent, and has good water-binding properties.[11]

Shea butter is mainly used in the cosmetics industry for skin- and hair-related products (lip gloss, skin moisturizer creams and emulsions, and hair conditioners for dry and brittle hair).[12] It is also used by soap makers and massage oil manufacturers, typically in small amounts, because it has plenty of unsaponifiables, and higher amounts result in a softer soap that has less cleaning ability. Some artisan soap makers use shea butter in amounts to 25% – with the European Union regulating the maximum use around 28%, but it is rarely the case in commercially produced soap due to its high cost compared to oils like palm oil or pomace (olive oil). It is an excellent emollient for dry skin. No evidence shows it is a cure, but it alleviates the pain associated with tightness and itching.

In some African countries such as Benin, shea butter is used for cooking oil, as a waterproofing wax, for hairdressing, for candle-making, and as an ingredient in medicinal ointments. It is used by makers of traditional African percussion instruments to increase the durability of wood (such as carved djembe shells), dried calabash gourds, and leather tuning straps.[citation needed]

Shea butter is sometimes used as a base for medicinal ointments. Some of the isolated chemical constituents are reported to have antimicrobial, anti-inflammatory,[13] emollient, and humectant properties.[citation needed] Shea butter has been used as a sunblocking lotion[citation needed] and some of its components “have limited capacity to absorb ultraviolet radiation“.[3]

In Ghana, shea butter locally known as Kpakahili (Eng. trans. raw cream) in Dagbani, nkuto (Akan) or nku (Ga), is either used as a food product or applied as lotion to protect the skin during the dry Harmattan season. The shea nut tree itself is called tááŋà (pl. táánsì) and the fruit is called táánì (pl. támá). The current northern regional capital Tamale, derives it names from a combination of the words “tama” and “yili”, meaning “the town of shea fruits”.

In Nigeria, shea butter is used for the management of sinusitis and relief of nasal congestion.[14] It is massaged into joints and other parts of the body where pain occurs.[15]

The United States Agency for International Development and other companies[16] have suggested a classification system for shea butter, separating it into five grades:

Commercial grades are A, B, and C. The color of raw (grade A) butter ranges from cream (like whipped butter) to grayish yellow. It has a nutty aroma which is removed in the other grades. Grade C is pure white.[17][18] While the level of vitamin content can be affected by refining, up to 95% of vitamin content can be removed from refined grades (i.e., grade C) of shea butter while reducing contamination levels to undetectable levels.[19][20]