The Swazi (Swazi: siSwazi) are a Bantu ethnic group of Southern Africa, predominantly inhabiting modern Eswatini, South Africa’s Mpumalanga province and Mozambique. The Swazi are part of the Nguni family that can be archaeologically traced in East Africa where the same tradition, beliefs and cultural practices are found. The Swazi share a unique experience, culture and Royal lineage. This lineage is exclusive to the inhabitants of Eswatini, even though there have been more Swazi people that have moved to South Africa and the United Kingdom in the 20th century. The original inhabitants of Eswatini no longer reside in Eswatini as a majority population while some remain in the land. The Swazi people and the Kingdom of Eswatini today are named after Mswati II, who became king in 1839 after the death of his father King Sobhuza who strategically defeated the British who occupied Swaziland. The Kingdom of Swaziland was a region occupied by the San people of Southern Africa and the current Swazis came in from North Eastern regions through to Mozambique and eventually Swaziland in the 15th century. Mixtures with the San people and other Nguni tribes occurred. Their royal lineage can be traced to a chief named Dlamini I; this is still the royal clan name. About three-quarters of the clan groups are Nguni; the remainder are Sotho, Tsonga, others North East African and San descendants. These groups have intermarried freely. There are slight differences among Swazis as a nation with varying features and skin tones yet Swazi identity extends to all those with allegiance to the twin monarchs Ingwenyama “the Lion” (the king) and Indlovukati “the She-Elephant” (the queen mother). The dominant Swati language and culture are factors that unify Swazis as a nation since there is no other language spoken except for English.

The Swazis are Nguni clans, who migrated from North East Africa and later originated in South-east Africa in the fifteenth century, moved into southern Mozambique, and then into present-day Eswatini (Swaziland). The term bakaNgwane (“Ngwane’s people”) is still used as an alternative to emaSwati, to refer to the Swazi people. The Swazis are people who are predominantly Nguni in language and culture. However some of the Swazi people originate from Sotho clans that were also inhabitants of Eswatini which is why the surname Maseko as the original Royal rulers in Eswatini is similar to Maseho in Lesotho.

As part of the Nguni expansion southwards, the Swazis crossed the Limpopo River and settled in southern Tongaland (today in southern Mozambique near Maputo) in the late fifteenth century. The Ngwane people are recorded as having entered the present territory of Eswatini around the year 1600. Under the leadership of Dlamini III who took over from the Maseko and settlement took place in 1750, along the Pongola River where it cuts through the Lubombo mountains. Later on, they moved into a region on the Pongola River, which was in close proximity to the Ndwandwe people.[1] Dlamini III’s successor was Ngwane III, who is considered the first King of modern Eswatini. His rule occurred from around 1745 until 1780, and he ruled from the Shiselweni region of Swaziland.

In 1815, Sobhuza I became the king of Swaziland and was responsible for the establishment of Swazi power in central Swaziland. Here the Swazis continued the process of expansion by conquering numerous small Sotho and Nguni speaking tribes to build up a large composite state today called Swaziland. Sobhuza I‘s rule occurred during the umfecane wars, resulting from the expansion of the Zulu state under Shaka. Under Sobhuza’s leadership, the Nguni and Sotho peoples as well as remnant San groups were integrated into the Swazi nation. It was during his rule that the present boundaries of Swaziland were fully under the rule of the Dlamini kings.

In the late 1830s, initial contact occurred with the Boers, who had defeated the Zulus at the Battle of Blood River, and were settling in the territory that would become the South African Republic. To establish a peaceful coexistence, a substantial portion of Swazi territory was ceded to the Transvaal Boers who were settled around the Lydenburg area in the 1840s. The territory of Swaziland, and their king, Mswati II, were recognized by both the Transvaal and by Britain. It was during the rule of Mswati II, that the Swazi nation was further unified and the people and their country became known as they are today. Thereafter, the label “Swazi” eventually was applied to all the peoples who gave allegiance to the Ingwenyama.[2]

Later under Mbandzeni, many commercial, land and mining concessions were granted to British and Boer settlers. This move led to further loss of land to the South African Republic. The result was that a substantial Swazi population ended up residing outside Swaziland in South Africa. The Pretoria Convention for the Settlement of the Transvaal in 1881 recognized the independence of Swaziland and defined its boundaries. The Ngwenyama was not a signatory, and the Swazi claim that their territory extends in all directions from the present state. Britain claimed authority over Swaziland in 1903, and independence was regained in 1968.

The Kings of Eswatini date back to some considerable time to when the Royal line of Dlamini lived in the vicinity of Delagoa Bay. The Swazi people as a nation were originally formed by 16 clans known as bemdzabuko (“true Swazi”) who accompanied the Dlamini kings in the early days. The 15 founding clans were Dlamini, Nhlabathi, Hlophe, Kunene, Mabuza, Madvonsela, Mamba, Matsebula, Mdluli, Motsa, Ngwenya, Shongwe, Sukati, Tsabedze, Tfwala and Zwane. Other Swazi clans are the Emakhandzambili clans (“those found ahead”, e.g. the Gamedze, Fakudze, Ngcamphalala and Magagula), meaning that they were on the land prior to Dlamini immigration and conquest. The Emafikemuva (“those who came behind”) who joined the kingdom later. 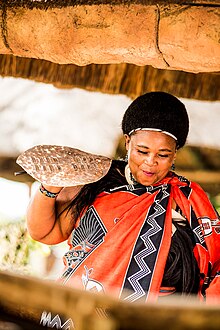 Dancing and singing, including praise-singing, are prominent in Swazi culture. Pottery and carving were minor arts. Swazi marriage is called umtsimba, it is usually on a weekend in dry season (June to August). Bride and her relatives go to groom’s homestead on Friday evening. On Saturday morning, the bridal party sit by nearby river, eat goat or cow meat offered by groom’s family; in the afternoon, they dance in the groom’s homestead. On Sunday morning, the bride, with her female relatives, stabs ground with a spear in man’s cattle kraal, later she is smeared with red ochre. The smearing is the high point of marriage: no woman can be smeared twice. Bride presents gifts to husband and his relatives.[3] Umhlanga is one of the well known cultural events in Eswatini held in August/September for young unmarried girls to pay homage to the Ndlovukati. Incwala is another Swazi cultural event held in December/January depending on the phases of the moon. This ceremony, also known as the “First Fruits” ceremony marks the King’s tasting of the new harvest.[4]

The traditional Swazi religion recognizes a supreme God/creator in its pure form while the ancestors are recognized. The Swazi religion is based on a creator known as Mvelincanti (he who was there from the beginning). Most Swazis intertwine this belief with modern day Christianity that was brought by the missionaries, yet many remain faithful to their original African spiritual beliefs. Spiritual rituals are performed at the level of family associated with birth, death and marriage.[5]